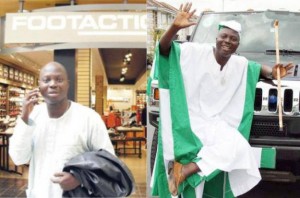 Popular Nollywood actor, Bolaji Amusan popularly known as ‘Mr Latin’ has relocated abroad based on his admission to study in a reputable university in London.

In a recent interview with Tribune, Mr Latin revealed that he has gained admission to study tourism at a reputable University in London.

The comic actor’s aim of becoming an educated comedian has been achieved as he is half way into securing his degree.

According to him “I  was not privileged earlier to further my education, but I gained  admission into a university in London 2years ago, where I am currently  studying Tourism.

So, by saying I am an educated comedian, I meant  I changed comedy from the stage where actors used to stuff their  tummies with costumes or overuse make-up. I brought reality into comedy”.