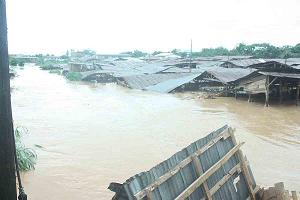 Flood has destroyed property worth millions of naira following a heavy downpour in Osogbo, Osun State capital on Wednesday night.

Mostly affected were residents of Ota-Efun area of the town that lost valuables to the rain which lasted for only one hour.

One of the victims whose business was badly affected is the proprietor of B and B Pharmacy and supermarket, Mr. Taofiq Lawal, who claimed to have lost about N10 million worth of drugs and electronics to the flood.

He alleged that the ongoing Osogbo/Kwara State boundary dual carriage road project was responsible for the flooding in the area.

According to him before the construction company opened up the road for dualisation, there was a good drainage system that allowed free flow of water in the area whenever it rained.

“In as much as we are all in support of the road project going on in our area, the effect is devastating as the drainage had been removed without providing an alternative,” he said.

Mr. Lawal appealed to the state government to come to the aid of the victims by providing funds and materials to help mitigate the effects of the disaster.

He added that the construction firm should also provide alternative drainage where water would move freely before the road is finally completed.