With just nine days to the end of the Ramadan fasting period, all security agencies in the country, especially the Federal Capital Territory, is on the alert, following intelligence reports of plans by the Boko Haram sect to carry out bombings within the country. 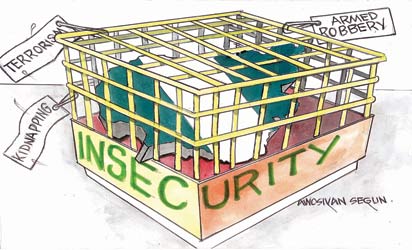 The intelligence report from the Directorate of State Security, which is corroborated by other intelligence organs of government, has been sent to all heads of security agencies in the country as Vanguard gathered and it said there could be ”possible terror attack, on or before the end of the Ramadan fasting”.

It was gathered that the Boko Haram terrorist group who are pained over the dislodgement of the camps from the North East following the declaration of a State of Emergency by the federal government, is keen on hitting back as a mark of revenge for the government military action against them.

Other targets include key and vulnerable points, and structures which if they succeed will elicit great outrage and sorrow.

The source further disclosed that the directive specifically requested all security agencies to beef up security in their areas of jurisdiction and surroundings. It advised that there should be severe stop-and-check operations for motorists, including motorcycle operators.

Consequently, Vanguard gathered that heads of security organisations in the country have directed all their operatives to be vigilant and work round the clock to forestall any terror attack.