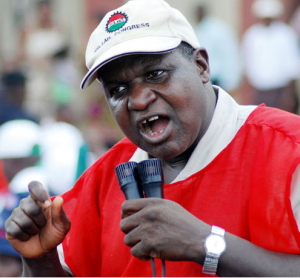 The Nigerian Labour Congress (NLC) has denounced plans by the Senate to strike out the Minimum Wage Law from the Exclusive List.

The move, the NLC argued, would be detrimental to the well-being of the weak and economically disadvantaged persons in the country.

The NLC President, Abdulwahed Omar, who stated this in a statement on Sunday, warned that the plan had serious implications for national security, productivity and well-being of the low-income earners.

Mr. Omar noted that if given the chance to fix their respective minimum wages, state governments would not hesitate to pay minimum wages as low as N1,000 to their workers in spite of the huge resources available to them.

“The Nigeria Labour Congress notes with concern efforts by the Senate to remove the national Minimum Wage Law from the Exclusive List in defiance of reason, popular opinion and protection of the interest of the weak and the vulnerable” he said.

“The removal will unnecessarily expose Nigerian workers, especially, those in the low-income bracket, with grave implications for security, productivity and national well-being, as most state governments if given the latitude, will pay wages as low as N1,000 per month in spite of the relatively enormous resources available to them.

“This fear is justified or underscored by the reluctance or refusal of some of them to implement the N18, 000 Minimum Wage Law. Even for some of them that implemented the law, it took a heroic struggle.”

He further warned that the inclusion of the minimum wage in the concurrent list would lead to confusion, and anarchy in the country.

Omar said in a memo to the National Assembly on the amendment of the 1999 Constitution, the NLC demanded the retention of the Minimum Wage Law in the Exclusive List for the maintenance of a standard national minimum wage as obtainable in developed countries and for protecting the weak and vulnerable workers.

He further remarked that in spite of the N18, 000 Minimum Wage, Nigerian workers were still among the least paid in the world.

Omar lamented that the cost of living in the country had soared with the rise in inflation affecting the costs of food, accommodation, and utilities.