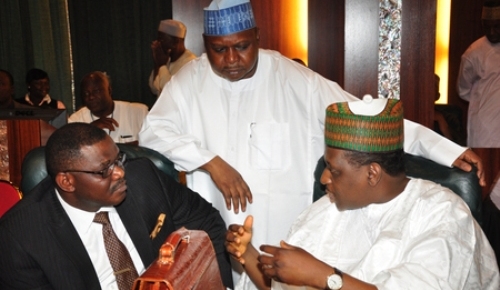 Nigerian ministers receive higher salaries and allowances than their counterparts in Britain, United States, South Africa and other stronger economies, relative to the country’s wealth, an investigation by Daily Trust using official data from several sources has revealed.

A Nigerian minister soaks up N32 million (about $200,000) in yearly emoluments, more than 120 times the country’s gross domestic product per person (GDP).

This means that a minister picks up a package that equals over 120 times what each Nigerian citizen is worth when the nation’s total wealth is shared by the population.

In these terms, the cost of maintaining a minister here by far overtakes what obtainsin Singapore which pays the one of the highest packages globally. A Singaporean minister receives about N240 million yearly but this is only 28 times the country’s GDP per person.

A minister (secretary) in the United States is paid about N31.84 million yearly, a little less than the Nigerian ministerial package but amounting to just 3.9 times the GDP per person in the US.

South Africa pays N31 million, while Australia pays N22 million to a minister amounting to 2.1 times of GDP per person in that country.

Euro Zone’s biggest economy Germany pays about the same amount as Nigeria, while Britain pays a slightly higher amount of cash of about N33million but this is only 2.4 times its GDP per person.

Nigerian ministers are even ahead of heads of government in very wealthy nations like Britain and France, whose Prime Ministers receive about N30 million yearly.

In Canada, a minister’s salary is 4.5 times the country’s GDP per capita, though he receives N38 million per annum – a higher amount of cash than Nigeria’s.

The gap is even more striking when the Nigerian minister is compared with his colleagues in less strong economies, like Ghana’s which pays N9 million to a minister – just 35 times its GDP per person.

The report of the jumbo pay received by the ministers comes on the heels of the Economist magazine’s report which also placed Nigerian federal legislators on the top spot in global MPs’ salaries chart.

According to records of the Revenue Mobilisation, Allocation and Fiscal Commission (RMAFC), a Nigerian minister of state receives N30 million ($189, 735) yearly in salaries and allowances, slightly less than his substantive cabinet minister.

With 30 ministers and 12 ministers of states in President Goodluck Jonathan’s cabinet, the Federal Government spends more than N1.3 billion yearly to maintain the ministers.

The senior and junior ministers receive about N960 million and N360 million per annum respectively in legitimate perks.

But RMAFC had said ministers illegally receive much more money, through frivolous trips, maintenance of fleet of vehicles and other costs.

While these should be all they are entitled to, government officials take lots more, according to then-RMAFC chairman Hamman Tukur in 2009 when he presented a report proposing reduction of emoluments of public officers.

Apart from their salaries and allowances, ministers also spend public funds to buy exotic cars for themselves despite the monetisation policy, which expects most of them to buy vehicles only from the allowances paid to them.