The face-off between Governor of Rivers State, Chibuike Rotimi Amaechi and the Commissioner of Police in the state, Mr. Joseph Mbu, has caught the attention of the House of Representatives which has promised to wade into the matter before it goes out of control. 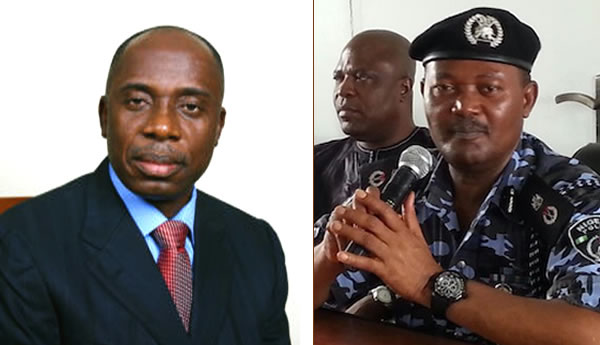 The House, at its sitting on Wednesday, observed that the no-love lost relationship between the duo could lead to a total breakdown of law and order in the state and consequently, directed its Joint Committee on Police Affairs/Justice to “liaise with the office of the Inspector-General of Police, and the Police Service Commission to fashion out ways of improving the working relationship between the state Police Command and the Rivers State Government.”

The resolution followed a motion sponsored by Rep. Peter Edeh (ANPP, Ebonyi), who warned that the security of the state could be jeopardised if the row between Amaechi and Mbu is not brought under control.

He noted, “The situation has so deteriorated to the level of  the governor accusing the commissioner of police of deliberately undermining the security of lives and property of the people of the state, while the CP accused the governor of being power-hungry, a tyrant and dictator; statements which confirm that their working relationship has broken down irretrievably.”

The lawmaker expressed surprise that Mr. Mbu’s boss, the Inspector-General of Police, Mr. Mohammed Abubakar, had not made a comment on the issue publicly or gave any indication that he was addressing it.

Edeh added, “The existing situation in Rivers State is not only untenable but also constitutes grave danger to peace, security and orderliness in the state.

“If left unchecked, it will constitute a bad precedent and threaten democratic institutions in the state and beyond.”

When the motion was put to a voice vote by the Deputy Speaker, Mr. Emeka Ihedioha, who presided over the sitting, it was unanimously endorsed by all the members present.