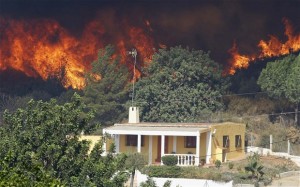 A vast forest fire on the Spanish island of Mallorca almost burnt out of control, prompting a complete evacuation of a seaside village.

About 700 people in Estellencs, many of them tourists, were woken late Saturday (Sunday AEST) and brought to safety after a wind change threatened to push the blaze in their direction, the government of the Balearic Islands said.

On Sunday, about 370 firefighters and members of civil defence and the military emergency unit used 24 planes and helicopters to fight the flames on the west of the Mediterranean island.

There were no initial reports of injuries or damage to property.

However, officials said the flames destroyed at least 16 sq km of pine forest in the area around Andratx and Estellencs.

Media reports describe the blaze as the worst fire on the holiday island since the 1990s. Mallorca’s most devastating fire was in 1992, when almost 20 sq km were destroyed in the Arta area in the east.