There was gloom yesterday at the residence of  Mrs Iwari Oba (aka Madam Sisi), the adopted mother of the First Lady, Dame Patience Jonathan located at Block 12, Road 1, Aziko Housing Estate, Yenagoa , Bayelsa State, who died on Monday in ghastly motor accident . 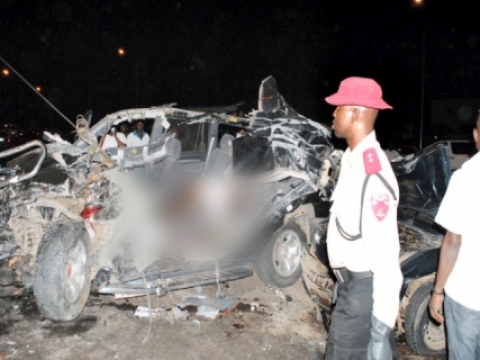 The workers in the house wore long faces even as Bayelsa State Governor, Henry Seriake Dickson and his Delta State counterpart, Dr Emmanuel Uduaghan condoled with the family.

The situation was not different at the Otuoke residence of the First Lady as the House was quiet with staffers not ready to talk.

The late Mrs  Iwari Oba (aka Madam Sisi) was on her way to Yenagoa  from Port Harcourt to check the renovation of her house, which she vacated during the wake of the 2012 flood when the vehicle she was travelling in got involved in an accident along Elele at the East/West Road.

Rescue efforts could not save her as she was said to have died while she was being taken to hospital. Her body was deposited at the Kpaima mortuary, Elechi Beach Doibu, Port Harcourt.

At her residence, which was still under renovation, none of the workers was willing to comment as no relation was around.

A neighbour, who craved anonymity, said Madam Sisi moved out of the building during the 2012 flood, which sacked her from the house. He said renovation commenced this year as the roof was removed and the floor was raised up to prevent flood from threatening her again .

“The workers working told us that she was in town on Monday to see the extent of   work in the renovation of her house because she was tired of staying in Port Harcourt. Last night, when the news filtered in that she was dead, many of the workers made frantic phone calls to ascertain if the story was true,” he said.

Another source close to the family said the First Lady was devastated on hearing the news of the demise of the woman she fondly called Sisi since she adopted her as her mother.

The source, who said Madam Sisi was tired of shuttling between Port Harcourt and Otuoke since flood sacked her from her Yenagoa residence, noted that her death has disrupted the programmes of the First Lady.