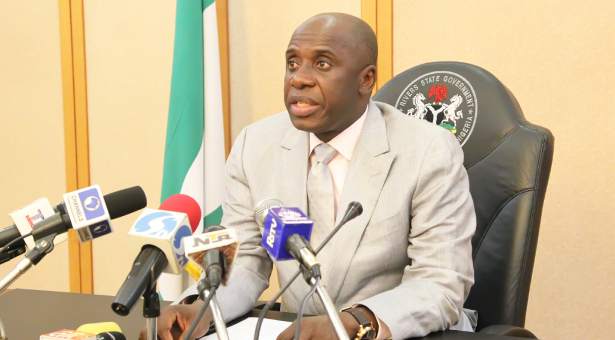 National leader of Action Congress of Nigeria, Asiwaju Bola Ahmed Tinubu has rallied support for Governor Rotimi Amaechi of Rivers State, who he claimed is a ‘marked person’ and must not be left to suffer his fate alone.

Tinubu, in a terse statement issued by his media office last night, described the ensuing fracas in Rivers State as an orchestrated plan that is synonymous with the ruling Peoples Democratic Party, PDP’s definition of democracy; where minority opinion prevails over majority.

He cited the recent NGF chairmanship election and the attempt by five members of the Rivers State legislature to dominate the others as examples of how far the PDP would go to achieve its aims even against reason.

While calling on all Nigerians to rally round Amaechi, Tinubu said the governor’s travails could be traced to his decision to stand up for his people in the Bayelsa versus Rivers State oil boundary legal dispute.

According to Tinubu, “The PDP appears to have added public brawling to its list of accomplishments. The self-proclaimed largest party in Africa has turned into a fight club that employs the police as ushers for its matches.

“There is no way the police and the small number of five lawmakers would act so brazenly unless they receive instructions for their high places. Nigerians must ask, ‘is this the way that President Jonathan intends to transform Nigeria; by turning it from an imperfect democracy into a perfect mess?’ A total lack of respect for constitutional democracy is what we are witnessing. Governor Rotimi Amaechi swore an oath to protect and serve the people of Rivers State.

“My advice is that we should not leave Governor Amaechi to suffer his fate alone. All true democrats must defend constitutional democracy and true federalism. In what stable and functioning democracy can you find a President or his agents bully a governor this way or violate the federal constitution so openly with complete impunity?

“Discerning minds must locate the present crisis in the suspected injustice in the Bayelsa and Rivers State oil boundary legal battle. For standing up in defence of the interest of his people, Governor Amaechi became a marked person.

“In some ways, this Rivers episode is unsurprising. Over and over again, the PDP has attempted to scuttle fair elections and genuine democratic processes. Undermining democracy has become a central plank in the party’s manifesto. What happened in the Rivers House is one more reminder. PDP leaders hold democracy in contempt and will trample it if given the slightest opportunity. If they invert the relatively small numbers involved in the Nigerian Governors Forum (NGF) and the Rivers State House, what they might do to general elections involving such a large population as ours is a hard piece of wood to chew.

“If we continue in this way, we are heading for an encounter with fate that will leave no one unscathed. These people need to realize they can’t lord over 150 million people as if they had replaced our colonial masters. You cannot attempt to control the mind of every person only to threaten, intimidate and assault people who do not fall perfectly in line.  Such a world is not a world of democracy. Such a place is the land of elected dictatorship and a dictator is unacceptable even if he initially gained office through the ballot.

“Perhaps we now know why the PDP is such a poor steward of democracy. It is hard to be a good democrat without knowing how to count properly and this crew cannot count. During the NGF debacle, they claimed that 16 was larger than 19. Now in Rivers, they claim 5 outnumbers 27. If they can’t count, how can we count on them to improve the nation?  If they can’t add, it is a mistake to rely on them to add anything good to our lives. For reasons best known to them, they have tried to pin the Rivers governor to the wall.”

The ACN leader said the PDP has turned Rivers state into a battle zone and warned other states not to ignore what is happening there because it could be their turn tomorrow if the ruling party is allowed to have its way unchallenged.

“Events in that state are but a symbol and a forecast; as long as the current PDP leadership holds forth, we will have many rivers to cross before this land sees genuine democracy” he noted.