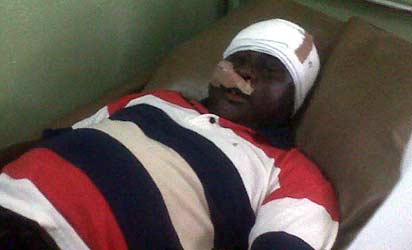 Factional chairman of the Rivers State chapter of the Peoples Democratic Party (PDP), Chief Felix Obuah, has said that arrangements have been concluded to fly the injured lawmaker representing Obio/Akpor II constituency in the State House of Assembly, Michael Okechukwu Chinda abroad for better treatment.

Speaking in Port Harcourt yesterday, Mr. Obuah also called for a probe into the role of the State Governor, Rotimi Amaechi in the saga just as he called for the immediate arrest and prosecution of the Assembly leader, Chidi Lloyd, Chief Security Officer (CSO) and Aide-de-Camp (ADC) to the governor for their involvement in the attempted murder in the Rivers State House of Assembly on Tuesday, July 9.

“Not even in the worst democracies of the world can a lawmaker willfully premeditate and position to hack a fellow lawmaker to death, as Chidi Lloyd did to Hon. Michael Okechukwu Chinda.

“Up till now, neither Governor Amaechi nor Chidi Lloyd and their blood-thirsty accomplices have been invited for explanation by the relevant security agencies, over the attempted murder.

“Chidi Lloyd is yet to realise that parliamentary immunity from prosecution over speeches made on the floor of the House of Assembly, does not guarantee a deliberate attempt to kill or cause bodily harm on his colleagues or any other person, within the Assembly complex.

“Hon. Chinda is lying critically ill in a private hospital in Port Harcourt; where series of surgery have been performed to save his life, stitch his broken head and nose, among other bodily injuries.

“It is indeed dramatic to see Hon. Chidi Lloyd lying on a hospital bed, pretending to be ill, when indeed he used the House’s mace to hit Hon. Chinda, who doctors are battling to save his life.

“It is Rivers PDP’s position that the attempted murder, deplorable and barbaric acts of Chidi Lloyd and Governor Amaechi’s personal aides be thoroughly investigated and appropriate sanctions given, if the very basic essence of legislative business in a democracy is not to be undermined.

“The PDP and Rivers people will no longer fold their arms and watch the reign of terror on the entire state by a few persons, whose inordinate ambition to hold on to power has frenzied them to go berserk.”

Mr. Obuah, who is considered a loyalist of the Minister of State for Education, Barr. Nyesom Wike, urged Rivers people, especially PDP members, to remain calm and go about their normal activities without fear.

He also flayed the House of Representatives resolutions which empowered the federal lawmakers to take over the functions of the Rivers House of Assembly, while describing the call for the redeployment of the State Commissioner of Police, Mbu Joseph Mbu, as uncalled for.