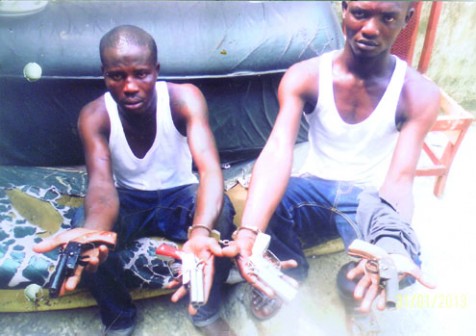 According to a police source, Pastor Victor Ajibishe of Solid Mountain Prayer Ministry, reported at a police station in Iddo that while they were having a night vigil in their church, some armed men invaded  the building.

The pastor said the armed robbers broke the window of the secretary’s office and entered the church.

The pastors told the police that the armed robbers who used a  pistol to shoot sporadically, injured three people while two were treated and discharged, the last person could not make it  as he was confirmed dead at the hospital as a result of the serious gun shot injuries he sustained.

According to the source, immediately the case was reported to the police station, FCT police control room was radioed and police officers moved to the scene and a manhunt was launched.

However, three of the suspected armed robbers were arrested,’’ the source further hinted.

The FCT police spokesperson said the three suspects are from Gora village in Nassarawa State.

“Upon interrogation, two of the arrested suspects confessed to the crime. Items stolen from the church include the sum of N500,000 while items recovered from them include cutlass, long stick and charms,” she said.

She also stated that the complainant equally identified the suspects as those that robbed them, adding that investigation into the case is ongoing.