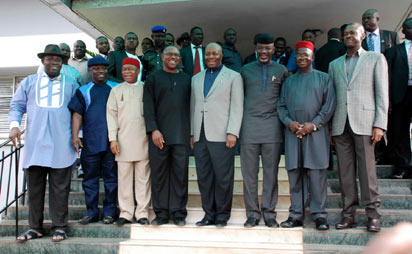 The fracas in the Nigeria Governors’ Forum (NGF) came to play yesterday as some governors shunned the meeting of the Southsouth/Southeast governors which held at the Enugu Governor’s Lodge in Enugu.

Conspicuously missing were Governors Chibuike Amaechi (Rivers), Rochas Okorocha (Imo) and Adams Oshiomhole (Edo). They did not send representatives either.

It was not clear if the absent Governors were invited or they deliberately boycotted the meeting which was attended by other governors in the zone, who are known to be pro-President Goodluck Jonathan’s 2015 ambition.

Obi, chairman of the Southeast Governors Forum, who read the group’s communiqué said the meeting discussed ways of collaboration between the two zones.

He said: “We met today in Enugu and discussed how the two zones will work together economically in the area of infrastructure.

“Akwa Ibom and Abia states have reached an understanding to work with the private sector to reconstruct and dualise the bad Ikot-Ekpene-Aba Road in order to improve economic activities within the corridor of both states.

“Finally, we commend the President of the Federal Republic of Nigeria. The various programmes shown in the mid-term report clearly shows that the transformation agenda is on course and we pledge to continue supporting him.”

All the governors drove off immediately after the meeting ended without fielding questions from Journalists.