Few days after the demise of the former Super Eagles footballer, Thompson Oliha, another wife of the deceased has emerged in Lagos State, southwest Nigeria. 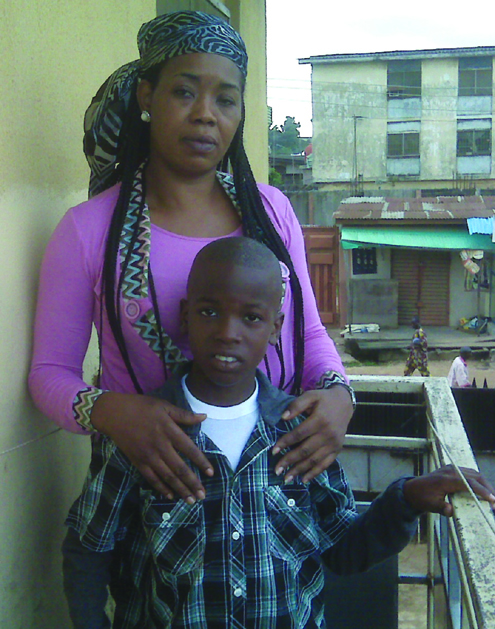 Oliha died Sunday after a brief illness in Kwara State and it was reported that he was married with a wife who had a daughter for him.

But a middle age woman, Ajala Mohammed, who is now mourning the late Oliha, told P.M.NEWS Sports that she has the only son for Oliha, Clinton, who will be nine years in February 2014.

She said members of the family including his friends and colleagues knew about the relationship which lasted five years before the late Oliha brought another woman who had a daughter for him.

Ajala said she was living with the deceased in his home in Lagos before he got a job with the Kwara State government and started living in Ilorin.

“Even though he was in Kwara State we still met when he came to Lagos. I also went to Ilorin to see him as we were preparing to have another child before his death,” she explained.

She said it was necessary to tell the whole world that Oliha had another woman who had his only son.

Ajala said there was a disagreement between her and the deceased which made her to move out his house because of the woman who had a daughter for him.

She said after some years, they mended fences because of their child and continued the relationship.

Ajala explained that she came into the late Oliha’s life after his football career when he ventured into business.

She added that the late footballer made huge loss in the business transaction because the goods he was importing were sold on credit and those who bought those goods did not pay his money and this affected his finances.

She, however, claimed she assisted the late Oliha to move on with life after the business misfortune before he got the coaching job that took him to Kwara state.

Meanwhile, when our reporter contacted the second wife of the late Oliha, Mrs Iris Oliha who is based in Kwara State, via telephone, she confirmed that Mrs Ajala Muhammed truly gave birth to a son for her late husband about nine years ago.

Mrs. Oliha added that though Ajala gave birth to a son to her late husband about nine years ago, but Ajala was never married or engaged to her husband before he passed away on Sunday.

“I am the only legally married wife of the late Thompson Oliha. Though about nine years ago, a year before I met my late husband, a woman gave birth to a son for my late husband but they never got married or did any traditional engagement.

“There is nothing secret about the existence of the woman or the son because everyone in the Oliha’s family knows about them and even his friends know about it.

“Oliha was a very popular footballer and there was no way he would have had a secret wife or son somewhere and the press and his friends wound not have known about it,” the 34-year-old woman who has a four years old daughter for the deceased said.

While commenting on why the existence of Mrs. Ajala and her son are coming to the public shortly after the demise of Thompson Oliha, the Edo state born woman said: “We are all Africans and we like to lay claim to what we don’t partake in. I think is one of those pranks. I am not saying the son is a bastard because even before the death of my husband Mrs. Ajala used to call to ask for money for the child’s upkeep or medicals. But I know she cannot claim to be married to my late husband.”

The late Oliha was a member of the 1994 African Nations Cup winning squad and after his retirement, he became one of the coaches at the Kwara State Football Academy in Ilorin.

A day before his death, the late Oliha was on the bench when Kwara Football Academy, KFA, played a friendly match with a team from Mali.

Further investigation revealed that he only complained of Malaria and was taken to an undisclosed hospital in the state capital.

He later died in that hospital same day and his body was deposited at a private mortuary in Ilorin.