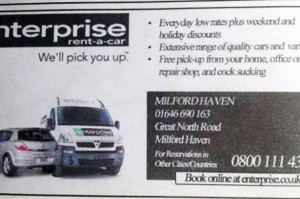 It seems vehicle hire comes with added extras in Milford Haven… This Enterprise Rent-A-Car advert appears innocent enough to the naked eye but take a closer look at the small print and you’ll see an entirely different service on offer. As well as low rates, quality cars and free pick-up, customers are also offered “c*** sucking”. The x-rated ad appeared in the Pembrokeshire Herald on July 19. Other adverts in the edition were also reportedly tampered with, although none to such an obscene extent. The newspapers publishers have now written to police asking them to investigate. According to HoldTheFrontPage, publisher Tom Sinclair told readers: “A number of adverts in last Friday’s newspaper had additional copy inserted into them after they had been proofed and signed off. “The extra copy contained language that was inappropriate for a family newspaper like ours. “I would like to make it absolutely clear that the adverts were altered without the knowledge of our advertisers or this newspaper. “The pages had been signed off and were ready to go to print. I would like to apologise to our readers and advertisers for any distress caused.”