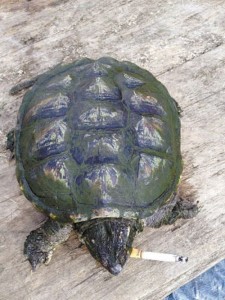 According to Chinese media reports, in a village on the outskirts of Changchun lives a nicotine-addicted alligator snapper turtle who smokes around 10 cigarettes a day. The turtle’s keeper says that whenever it feels the need for a smoke, the reptile becomes agitated and starts to hiss.

So how does a turtle become addicted to cigarettes? A local chef, surnamed Tang, who is helping his boss take care of it, says it all started about two months ago when he noticed the pet had lost interest in its daily fish diet. After inspecting the reptile, he noticed there was a sharp chicken bone lodged in its soft belly, but when he tried to pull it out, it snapped at his hand from the pain, nearly biting off his fingers.

Tang realized the only way he could take out the bone was to distract the turtle, so he took the lit cigarette that was resting in his mouth and gave it to the pet to bite on. Its jaws snapped on the filter and didn’t let go for hours. His idea proved effective, as he managed to remove the sharp chicken bone, but little did the cook know it would lead to an even bigger problem.

The next day, Tang sat down on a chair near the snapper turtle and lit a cigarette after a hard day’s work. As soon as it saw the smoke, the reptile crawled up on him, and being the responsible keeper that he is, he lit another one and put it in its mouth. The two often went on cigarette breaks together after that, until the turtle became hooked. Now, whenever it doesn’t receive a cigarette,the turtle starts to make hissing sounds and follows Tang around wherever he goes, crawling up on him until it gets the nicotine it craves.

It was fun in the beginning, Tang told the Changchun Evening News, but now he feels responsible for getting the turtle addicted to smoking, plus he can’t afford to keep sharing cigarettes with it. He says he welcomes any advice to help the turtle kick the habit.