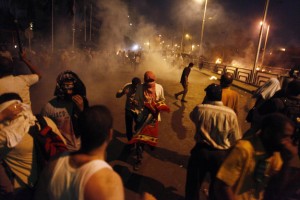 Seven people were killed and more than 260 wounded when Islamist supporters of Mohammad Mursi fought opponents of the deposed Egyptian president and security forces, marking a return of violence that overshadowed the naming of an interim cabinet.

Egyptian authorities rounded up more than 400 people over the fighting which raged through the night into Tuesday, nearly two weeks after the army removed Mursi in response to mass demonstrations against him.

Interim Prime Minister Hazem Al Beblawi is forming a government to lead Egypt through a “road map” to restore full civilian rule and to tackle a chaotic economy.

A spokesman for the interim president said Mursi’s Muslim Brotherhood had been offered cabinet posts and would participate in the transition. The Brotherhood dismissed the remarks as lies, saying it would never yield its demand for Mursi’s return.

Mursi’s removal has bitterly divided Egypt, with thousands of his supporters maintaining a vigil in a Cairo square to demand his return, swelling to tens of thousands for mass demonstrations every few days.

Two people were killed at a bridge in central Cairo where police and local Mursi opponents clashed with some of his supporters who were blocking a route across the River Nile overnight. Another five were killed in the Cairo district of Giza, said the head of emergency services, Mohamed Sultan.

Mursi is being held incommunicado at an undisclosed location. He has not been charged with any crime but the authorities say they are investigating him over complaints of inciting violence, spying and wrecking the economy.

A week of relative calm had suggested peace might be returning, but that was shattered by the street battles into the early hours of Tuesday morning, the bloodiest since more than 50 Mursi supporters were killed a week ago.

“We were crouched on the ground, we were praying. Suddenly there was shouting. We looked up and the police were on the bridge firing tear gas down on us,” said pro-Mursi protester Adel Asman, 42, who was coughing, spitting and pouring Pepsi on his eyes to ease the effect of tear gas.

The new cabinet is mainly made up of technocrats and liberals, with an emphasis on resurrecting an economy wrecked by two and a half years of turmoil.

Saudi Arabia, the UAE and Kuwait have promised a total of $12 billion in cash, loans and fuel.

Investors do not expect major reforms before a permanent government is put in place.

The new planning minister, Ashraf Al Arabi, said on Monday that the Arab money would sustain Egypt through its transition and it did not need to restart talks with the International Monetary Fund on a stalled emergency loan.

Ahmed Al Moslmany, spokesman for interim President Adli Mansour, said the authorities expected the Brotherhood and other Islamists to agree to participate in national reconciliation and had offered them positions in the interim cabinet.

“I am hoping and expecting, and I am in contact with members from the Muslim Brotherhood, and I can see there is an acceptance to the idea,” he said.

But senior Brotherhood figure Mohamed Al Beltaji said the movement had not been offered posts, and would reject them if it had. “We will not see reconciliation unless it’s on the basis of ending the military coup,” Beltaji said at a square near a Cairo mosque where thousands of Mursi supporters have maintained a vigil into its third week.

At Tahrir Square, rallying point for anti-Mursi protesters, a Reuters reporter saw teenagers in civilian T-shirts being handed rifles by troops in an armoured vehicle. It was not clear if they were civilians or security personnel in plain clothes.

The violence took place on the last night of a two-day visit by US Deputy Secretary of State William Burns, the first senior Washington official to arrive since the army’s takeover.

Military helicopters hovered overhead and police vans were brought in to quell the trouble. When that didn’t work, dozens of riot police moved in. Medics treated men with deep gashes to their eyes and faces nearby. [Reuters]