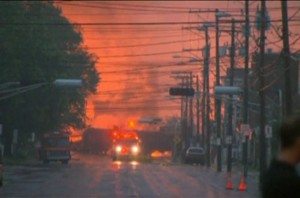 Several people are reportedly missing after a train, believed to be carrying crude oil, derailed and sparked several explosion in the middle of a small town in the Canadian province of Quebec.

At least 30 buildings are believed to have been destroyed in the blast in Lac-Megantic on Saturday, and up to 1,000 people have been evacuated from the area.

The disaster occurred shortly after 5 GMT when a freight train derailed in Lac-Megantic, a lakeside town of about 6,000 people near the border with Maine.

Although police said they could not yet get close enough to determine whether there were any casualties from the still-burning fires, an aerial photograph showed widespread devastation in the town centre.

An eyewitness told a local broadcaster the town centre had been crowded at the time of the derailment. Radio-Canada reported one building at the centre of the town was a bar popular with young people.

“Many parents are worried because they haven’t been able to communicate with a member of their family or an acquaintance,” Mayor Colette Roy-Laroche told the local channel.

“We can’t give out any information on what’s happening right now because the firemen haven’t been able to get close.”

The Canadian Broadcasting Corporation said four pressurised tank cars blew up after the train, which had 73 cars in all, came off the rails. Residents told reporters they had heard five or six large blasts.

Fire officials said they feared more of the tanker cars were at risk of exploding. About 30 buildings in the town centre were destroyed, some by the initial blast and others by the subsequent fire, they said.

Prime Minister Stephen Harper made an initial statement via Twitter: “Thoughts & prayers are with those impacted in Lac Megantic. Horrible news.”

Lac-Megantic is part of Quebec’s Eastern Townships region, an area popular with tourists that is close to the order with Maine and Vermont. Quebec is a predominantly French-speaking province in the eastern half of Canada.