Last week’s massacre of students at a government secondary school in Yobe State sent many families into mourning. 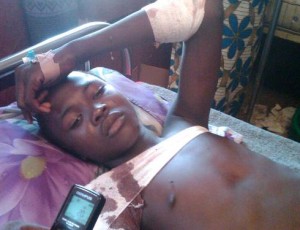 Weekly Trust visited some of the survivors of the gory incident and some parents of the deceased students to hear their stories.

A week after suspected insurgents violently attacked, slaughtered and burnt both students and teachers at Government Secondary School (GSS) Mamudo district in Yobe state, survivors of the ugly  incident and the entire community are   yet to recover from the shock, much as the atmosphere of fear still pervades the land.
Scores of students and teachers were killed in the early hours of Sunday, when a boarding school was attacked by the insurgents.  Accounts of the incident by survivors overwhelmingly revealed that the assailants gathered students and teachers into one dormitory, where they opened gunfire,  hauled explosive devices at them and set the place ablaze.

Yobe State government reacted by ordering the immediate closure of all secondary schools in the state, till the next academic session.  Governor Ibrahim Geidam said the schools would remain closed till next September when a new session would commence.

Since the incident, survivors who are witnessing the second such dastardly insurgents attack on secondary school students, have been scared stiff to even talk about the incident.  The fear stems from the realization that the insurgents actually carried out their threat to launch a second attack after the first incident.

A widow, Amina Nuhu, whose husband,  Nuhu Datam was killed a  month back,  by gunmen during the first attack,  told Weekly Trust that the insurgents  warned them of further attacks on  schools soon.

She said “my husband arrived from a journey when the gunmen stormed our house. We were chatting when they suddenly broke in, rounded us up and shot him twice on the chest.  I knelt before them, pleading for mercy on my husband,   but none of them listened. They confidently and freely walked away uninterrupted by any security agent.”

“They also threatened coming back to burn down the school. So, it was not a surprise to me when I heard sporadic gunshots and explosions that Sunday morning around 3:45am. We went into the school the next morning and saw corpses littered everywhere and the administrative block torched,” she said.

A mournful parent,  Malam Ahmed Sani who lost one of his two children to the incident  at GSS Mamudo initially refused to talk to newsmen, but said  “these people know what they did and God will surely handle them. But I would like to assure you that, I will not stop taking me children to boarding schools.”

A junior student, Sani Mohammed, who sustained bullet wound on his arm, but survived relived his experience thus;  “we were sleeping in UBE hostel, when some gunmen broke into the room and poured petrol on our bodies; I woke up and discovered that they have surrounded all of us. One of them asked us to lie down on the floor, we all complied. They separated the younger ones among us and asked them to stay behind.

“They opened fire on about 20 of us, the next thing I knew was seeing myself on the hospital bed,” he said.

Another student recounted that “we were rounded up by the attackers; they later conveyed us to the principal’s office for screening. They checked our armpits and genital parts to see if it developed hair, an indication that you are matured. They released the underage among us and opened fire on the matured ones.

“I just cannot say how I managed to escape from the office, because they threw explosives into the office after they opened fire on us, I just found myself running in the bush,” he said.

A nurse, who pleads anonymity, said four students were brought to the hospital alive, “but one of them died instantly, one was taken to the Federal Medical Center Azare on referral, while the other two are responding to treatment.”

“As at the time they brought the first batch,  I saw about 23 corpses,  but they later brought more. So, I cannot say exactly the total. Many of the parents were still unable to identify their children from the badly charred bodies and were still uncertain if they had died or survived,” she said.

Malam Saleh Potiskum a father to one of the students burnt to death said he cried in a manner he has never wept before in his life, when the school children identified a roasted copse as his son.

“I still couldn’t convince my mind to believe that what I saw was my son, because, the corpse was burnt beyond recognition. But I must accept his fate, because some of the students gave testimony that they saw him struggling with the flames before it consumed him finally. I blame government for not providing enough security for the children,” Saleh lamented.

Alhaji Abdullahi Adamu, who was yet to trace his son dead or alive, said   “myself   and my wife have been sleepless since the day we received information of the attack, because we still can’t find him. It is better for them to declare him dead   than leaving us in suspense, as it is now.”

However, the school’s Principal shied away from releasing the list of murdered students for the apprehension it would cause the public, saying the “list is only for State Security Service (SSS) and not journalists.”

A resident,  Malam Rabiu Nguru still in shock of what has happened, lamented that government schools in Yobe State have been attacked twice  and students killed within a month.

“Who else could be safe in the state? The security agents should urgently assess the checkpoints and the curfew to decide on better ways to operate,” he said

A father to one of the slain students, who pleads anonymity, said his son who was shot by the assailants ran from the school to the nearby Bubaram village.

He said “I am a brother to the school principal. When my son sustained the bullet wound, he ran down to his mother at Bubaram village but, couldn’t survive it due to the excessive bleeding he went through.”

He (Yobe resident) berated government for its decision to shut down secondary schools in the state, adding that it was as good as accepting defeat.

“They did that because their children are not part of the system, most of their children go to private schools and it is just the simple reason,” he stressed.

“Security agents were deployed to Turkish International Collage,  Mamudo even before the first students attack in Damaturu, but our children were left alone in the schools without parameter fences. The assailants gave notice of the attack, but no action was taken, so, what impact could the school closure make? Demoralizing parents and the students or what?”, he further asked angrily.

The state Commissioner for Lower Education, Mohammed Almin described the incident as pathetic, ungodly and callous, adding that the state government will fence all the secondary schools in the state and provide them with enough security.