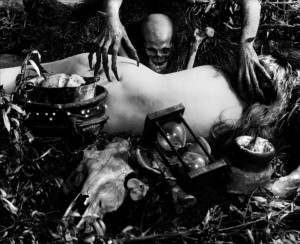 Two children of the same parents, yesterday threw Lampese, Akoko Edo Local Government Area of Edo State into confusion when they reportedly lured their mother identified as Mrs. Itowo Ojeifo to a farm road and killed her.

The siblings identified as Omolayo Ojeifo, 25 and her younger brother, Taiye, 20, had accused their mother of being a witch.

Omolayo, it was learnt had a running battle with her mother, whom she accused of being the reason she had not prospered in life and also being a witch.

She was said to have apologised to her mother few days to the dastardly act and pleaded that she was misled into believing that her problems were caused by her, but unknown to the deceased, she was being tricked into her untimely death.

Last Wednesday, Omolayo appealed to her mother to accompany her somewhere and despite her mother’s refusal that she was busy at home, she was able to convince her mother to follow her, as the deceased abandoned the cassava she was peeling and accompanied her, not knowing that her children had perfected plans to kill her, sources say.

She was said to have been led through a bush path to the farm and midway, the son brought out a machete, which he used in “cutting their mother.”

An eyewitness, who was said to have been threatened by the suspects that he would be dealt with if he reports what he saw, was said to have rushed back to the community, where he reported the incident, but before people could be mobilised to the scene, the woman had been killed by her children.

Edo State Police Public Relations Officer, Moses Eguavoen, yesterday, confirmed the incident. He said it happened on July 3 and that it was the former husband of the deceased, Mr Sunday Itowo that made a formal report to the police on the incident.

According to him, the victims ran to Uzebba in Owan West Local Government Area but the covert intelligence of the police led to their arrest.

“The case will soon be transferred to the state command for further investigation,” Eguavoen said.