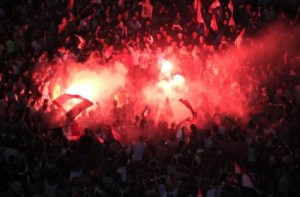 Six people died as protesters flooded Egypt’s streets calling for Islamist President Mohammad Mursi to step down, in massive demonstrations reminiscent of the 2011 revolt which ultimately paved the way to his leadership.

“It is the biggest protest in Egypt’s history,” a military source told AFP on condition of anonymity, adding that “millions” of people were on the streets across the country.

Five people were killed when clashes broke out on Sunday evening and another person died overnight from injuries, a ministry official told a private satellite channel.

A 26-year-old man died and several others were wounded as protesters attacked the Cairo headquarters of the Muslim Brotherhood, a hospital official said.

Television pictures showed the building on fire as dozens of people attacked it, throwing stones and fire bombs.

Supporters of the Brotherhood fired buckshot at the attackers in a bid to repel them, an AFP journalist at the scene witnessed. Later, automatic weapons fire could be heard around the building.

Gehad al-Haddad, a spokesman for the Islamist movement, said around 150 “unidentified thugs” had attacked the offices.

Three people were killed in the central province of Assiut when gunmen on a motorbike opened fire on protesters, a security official said.

One person died and 40 others were injured when supporters and opponents of Mursi clashed in Beni Sueif province, south of Cairo.

Both those incidents took place outside offices of the Freedom and Justice Party, the political arm of the Muslim Brotherhood.

“Dialogue is the only way through which we can reach an understanding…,” Mursi’s spokesman Ehab Fahmy told reporters.

“The presidency is open to a real and serious national dialogue.”

But as chants of “Leave!” rang out around Cairo, the main opposition National Salvation Front called for a campaign of peaceful civil disobedience.

They urged Egyptians to stay on the streets until Mursi stepped down.

One opposition leader called on the army to intervene if Mursi refused to quit.

“The armed forces must act, because they have always been on the side of the people,” which “has expressed its will”, said Hamdeen Sabahi, who came third in the 2012 presidential election.

The best outcome would be if Mursi went of his own accord, he added.[AFP]