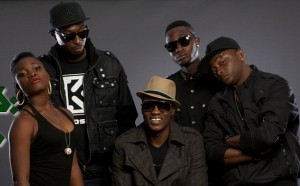 The last has certainly not been heard of the sordid tussle between Jagbajantis singer Sound Sultan and Sho Le singer Sean Tizzle. A couple of weeks ago, Sultan claimed to have written Sho Le and given it to Tizzle. When he did so, Tizzle was on his record label, Naija Ninjas, and the song was given to him as part of efforts to develop his career.

The latest development on the issue however is that since Sultan and his Naija Ninjas partner, his brother Baba Dee, said earlier in the week that they will seek legal redress over Sho Le’s ownership, copyright issue, Tizzle and Difference have gone to make peace with Sultan and his camp. Consequently, Sultan, a devout Muslim, is said to have forgiven in the spirit of Ramadan and both camps have agreed on the future of Sho Le.

The funny thing however is that when Entervaganza got in touch with Difference Entertainment, they said they were not interested in whatever Sultan plans to do over the contentious song.

They also refused to comment on the actual identity of who wrote the song.

And when called, Sultan refused to disclose where he stands presently on Sho Le, thereby deepening the matter of if the issue has really been resolved or not.