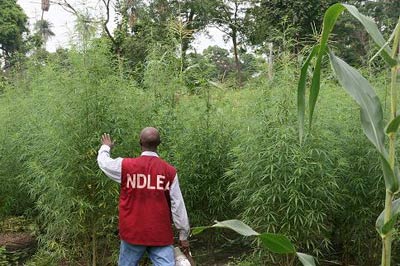 A report by SUNDAY PUNCH has revealed that the South-West geopolitical zone has the largest cannabis (popularly called Indian Hemp or Igbo) plantations in the country, with 1,404.27 hectares of cannabis farmland destroyed in 2012.

The plantations were concentrated in Ekiti, Ondo, Osun, Ogun and Oyo states.

According to the report which based its findings on data from the Head, Public Affairs of Nigeria Drug Law Enforcement Agency (NDLEA), Mr. Mitchell Ofoyeju, Ekiti State tops the list of states in the zone, with 764 hectares of cannabis farmland.

It added that Delta and Edo states in the South-South top the list of states with the largest cannabis farms from other zones just as the anti-narcotics agency disclosed that the North-West had the highest number of arrests of drug suspects with 2,185 out of 8,052 arrested.

On the volume of narcotics seized by NDLEA in the year under review, 233,700kg of narcotics was impounded with the South-South having the highest, with 106,676.716kg.

On the number of arrests made, Kano State recorded the highest number with 705 suspects – all males.

The NDLEA spokesman noted that the above statistics assisted the agency in resources allocation and personnel deployment in line with the rating of the geographical locations.

He added that it helped the agency in planning raid operations and public enlightenment campaign programmes.

Ofoyeju said, “The Chairman of the NDLEA, Ahmadu Giade, recently posited that cannabis cultivation has serious implication on national economy and security.

“Cannabis eradication is one of our priority concerns. It prevents cannabis from struggling with legitimate crops for arable land. Incentive is taken from the drug cartel, while legitimate farmers are encouraged to grow food and cash crops. Besides cutting off supply to the trafficker and drug addicts, cannabis control promotes national economy and security.”