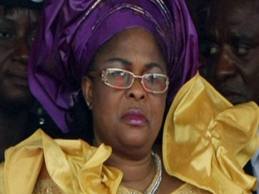 Wife of the President, Mrs. Patience Jonathan, on Friday took a swipe at Prof. Wole Soyinka, for attributing the crisis in the Rivers State House of Assembly to her.

In a statement by her spokesman, Ayo Osinlu, the First Lady said Soyinka betrayed the moral duty that was expected of him as a respected member of the society, to carefully consider all shades of issues that informed his opinions on any matter.

Mrs. Jonathan said Soyinka had become an embarrassment to his admirers with his diatribe against her. 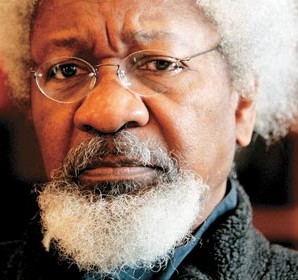 “Of course, this would not be the first time he would reach out against the First Lady, usually from self-righteously indignant lecterns.

“In this particular instance, his verdict was that Mrs. Jonathan was ‘stoking the crisis currently rocking her home state of Rivers…’, and thereupon asked Mr. President to caution his wife.

“The good, old Prof. reminds one of the truth that indeed, most of the giants on the street are men of like passions like everyone else. Worse still, most of them are actually standing on clay feet and would fail the test of a gentle push.

“Otherwise, who would have believed that the social, civil, constitutional and sundry rights crusader Prof. would maintain a safe distance from the heart of an activity that is a potential threat to the peace, security and safety of the people of a state, then collect exaggerated stories and jaundiced perspectives from familiar propagandists and character assassins, and promptly summon the media to a ‘state of the nation’ address.

“It’s an embarrassment to his throng of admirers and followers, that a sage of Prof. Soyinka’s status, who used to be a gauge of public morality in this nation, would lend himself to a propaganda of high drive, to save a governor who elected to launch into a river without applicable survival skills,” the statement read in part.

Mrs. Jonathan argued that the plan was to attack the President and pull to pieces anyone associated with him, as a strategy for attracting public sympathy to the “clear underdog.”

According to her, Soyinka was only contributing to the project when he claimed that she was Governor Rotimi Amaechi’s problem.