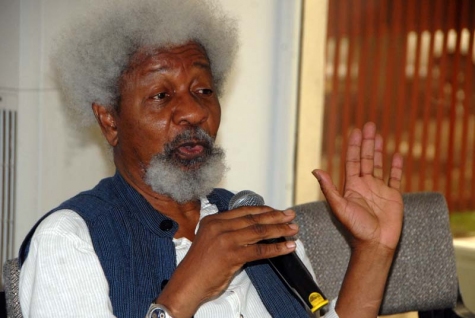 Nobel Laureate, Prof. Wole Soyinka has called on the Federal and State Governments to eliminate all barriers to children’s education.

He made the call in Aboekuta on Sunday when he hosted secondary school students across the country as part of this year’s Open Door Series Project, an international cultural exchange programme.

The programme was organised as part of activities to mark his 79th birthday.

Soyinka appealed to the students, particularly, those studying in the violence-prone areas of the north, not to be discouraged by the activities of Boko Haram sect.

He urged them to draw inspiration from the 16-year-old Pakistani girl, Malala Yousafzai, who was shot in the head on October 9, 2012 by Taliban fighters over her campaign for girl-child education in Pakistan.

Soyinka, who fielded questions from 79 student participants, charged them to cultivate zero tolerance for failure and strive to excel in all their endeavours.

“It might look very negative and hopeless, but we must not allow ourselves to be discouraged.

“The fact that people are still going to schools in those violence-prone areas shows that we should not be discouraged.

“You are not a complete human being if you are not educated, schooled or cultured.

“No matter what goes on around you, you must insist on your education.’’

The Nobel Laureate also used the occasion to dispel the insinuation that he graduated with third-class division.

Soyinka said that he graduated from the University College, Ibadan with a Second Class Upper.

He explained that although he had kept silent on the issue over the years, he decided to open up for the first time over the rumour as a mark of respect for the participants.

Earlier, Gov. Ibikunle Amosun of Ogun, described Soyinka as a world citizen and encouraged the participants in the essay competition to emulate his life and be more studious.

Amosun commended the organisers and re-stated the commitment of his administration to celebrate prominent Nigerians whose lives have remained sources of inspiration to younger generation.

The event, tagged: “Memoirs of our future”, was organised by a Lagos based multimedia company, Zmirage, in conjunction with the Ogun State Government. (NAN)