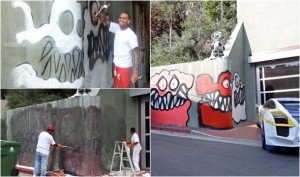 After weeks of intense arguments with neighbors, it seems the young famous singer Chris Brown is tired of the stress.

The neighbors of the singer had filed a court case against him saying the graffiti on his compound walls were scary and their kids were been scared off and horrified at the paintings.

However word has gotten round that the Grammy winner yesterday hired a clean up crew to paint over the murals on the walls outside his Hollywood Hills home, which neighbors.

Chris Brown previously appealed the citation through his attorney Mark Geragos, who claimed the murals are works of art on his clients property and therefore, did not warrant the citation.

According to reliable sources, Chris Brown has decided to coved the murals by choice and not from orders by the city.