According to an insider who was at the event that took place at the Presidential Villa with dignitaries, politicians, Nollywood stars, musicians, models and famous designers in attendance 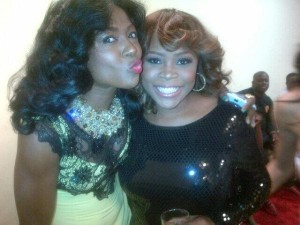 Actress Susan Peters was razz, irritating and annoying at the event, and this made other celebrities sick and uncomfortable, including a prominent Nollywood director who purposely stood up from the table the actress was sitting at (with some other Nollywood stars) and went to sit at another table filled with models and musicians (which we all know is very odd) because he couldn’t cope with her bad-mouthing, disgusting and to the gutters attitude of hers.

One of the guests at the table Charles was sitting at was over heard saying, you can’t believe the director left his seat because of that talkative actress.

Crux of the gist; Susan Peter caught up and walked to her state governor who was also present at the event, but was given the worst nightmare of her life as she was stopped by the governor’s aides. She went shamefully with her body getting smaller in her outfit, to meet Lady Boss who helped her get to the Presidential Villa which she never dreamt off or imagine she will ever be, and sits like a daycare baby beside her. Lady Boss was seen petting, and telling her to calm down. And before the twinkling of an eye, Egor made a call, a woman came to her, and she asked the woman to take crying baby Susan to the governor.

The funniest part is that, apparently Susan Peters and another actress Oge Okoye who fortune also smiles at as she was one of the people Lady Boss invited to the Presidential Villa, later snicked out to the Benue State Governor, and were given a large envelop with one big and everyone’s darling actress from another camp which caused a heavy fight on who’s going to get the large amount of what’s inside the envelop. Long throat I guess!

This fight was what caught Lady Boss’s attention, and she was heard foaming that ‘What is wrong with that razz and talentless Susan Peters’. How can a low-life idiot like Susan walk with her if not because of Lisa. That she will so deal with Susan. And again, one of the reasons why Lady Boss was very annoyed is because this was the same Susan Peter asking everyone that cares to listen if the president is going to refund their tickets money to Abuja and back to Lagos, or not.