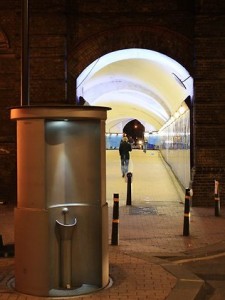 A $500,000 plan to install permanent outdoor urinals for drunk men in Sydney, Australia has been attacked as disgusting and potentially law breaking.

Sydney City Council Liberal councillor Edward Mandla labelled the roll out of permanent outdoor pop-up urinals as “weird”, warning the council it was encouraging men to expose themselves and break the law.

“These are open-air disgusting things. When you are legless and need to urinate you will do it anywhere,” he said.

“This money would be better spent on letting people know there is more to do in our local government area than drink.”

Mr Mandla warned drunks would most likely miss the bowl and spill on the street. He said he would refuse to use them.

“Passers-by would be looking at me. It’s a miserable idea. Exposing one’s private parts is against the law. This encourages breaking that law,” he said.

Temporary portable urinals are installed on Friday and Saturday nights during summer from 10pm until about 7am on party strips of Oxford St, Kings Cross, costing about $100,000 a year.

Lord Mayor Clover Moore said the urinals might not be good to look at, but worked in keeping mess off the streets.

“I don’t think they are attractive but they have been very useful in collecting urine,” Ms Moore said.

“The public has been witnessing them for three years now.” The council has voted to investigate the feasibility of installing permanent pop-up urinals and was “investigating options to recycle waste collected from portable urinals.”

Sydney City Council late night economy manager Susie Matthews said other cities around the world had been using outdoor urinals and found them effective – and cheaper than pop-up urinals installed each summer.

“The cost is in the installation. They are very effective. This summer we diverted 17,000 litres,” she said.

A council report said: “Public urination is a part of broader antisocial behaviour in parts of the CBD and entertainment precincts at night. Urination in public areas does not necessarily indicate the need for more localised public toilets.”