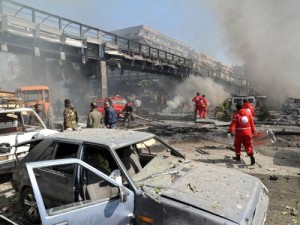 Russia takes its backing of the Russian regime to the UN as it has now presented evidence it says shows Syrian rebels attacked regime forces with sarin gas that was produced in “cottage industry” conditions.

Ambassador Vitaly Churkin said Russian experts had been to the scene of the attack at Khan al-Assal near Aleppo and gathered firsthand evidence.

Churkin said the attack killed 26 people, including 16 military personnel, and injured 86 others. Rebels have blamed government forces for the attack.
The samples taken from the impact site of the gas-laden projectile were analysed at a Russian laboratory certified by the Organisation for the Prohibition of Chemical Weapons, Churkin said.

He added that, according to information gathered by Russia, production of the projectiles started in February by the “Basha’ir al-Nasr’ brigade”, which is affiliated with the Free Syrian Army.

The Russian action risks reigniting an international dispute over the use of chemical weapons in the 26-month-old war, in which the United Nations says up to 100,000 people have been killed.

The United States has however rejected Russian claims raised at the United Nations that Syrian opposition fighters had used chemical weapons.

“We have yet to see any evidence that backs up the assertion that anybody besides the Syrian government has the ability to use chemical weapons, [or] has used chemical weapons,” White House spokesman Jay Carney said on Tuesday.

The Syrian government has refused to let a UN inspection team into the country, but this week invited UN officials for talks on the investigation.

Carney again called on the Syrian President, Bashar al-Assad, to allow foreign investigators to probe claims of chemical weapons use.

“The way to answer this question is to allow the United Nations to investigate,” he said.

“Our ability as an international community to investigate the use of chemical weapons in Syria is hampered by Assad’s refusal to allow a United Nations investigation.”

Britain, France and the United States say they have handed over evidence to UN experts indicating that Assad’s forces have used chemical weapons in the conflict.