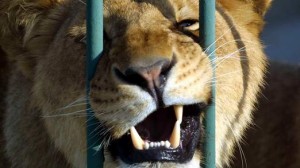 A teenager has been mauled by a captive lion after she tried to kiss the animal through the bars at a South African wildlife park.

Lauren Fagen, of Montreal, suffered severe flesh wounds when the male lion dragged her feet and legs into the enclosure at Moholoholo Wildlife Rehabilitation Centre.

The 18-year-old volunteer worker is recovering in hospital and says she is lucky to be alive.

“I didn’t realise he could stick his paws through. I should have died or lost a leg,” Ms Fagen told The Globe and Mail newspaper.

“It was a miracle that I survived. He could have ripped off my skin and I would have died of blood loss.”

Ms Fagen began volunteer work at the wildlife centre in June cleaning the lion cages and feeding other animals.

The attack happened while Ms Fagen was cleaning a feeding cage on Monday.

A five-year-old male lion named Duma began rubbing his face against an adjoining cage, and Ms Fagen said she decided to kiss the animal’s fur.

She told the newspaper she screamed for help until fellow student volunteers came to her rescue.