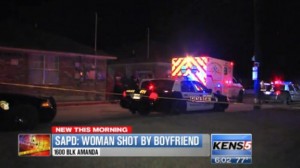 A San Antonio man faces criminal charges after he accidentally shot his girlfriend while aiming a weapon at his ex-girlfriend.

The man’s ex-girlfriend had unexpectedly arrived at his house and a verbal altercation ensued.

At one point the man left to retrieve his shotgun, only to be met with resistance from his current girlfriend upon his return.

Investigators say the woman tried to prevent her boyfriend from shooting his ex-girlfriend, and was “unintentionally” shot in the chest by her boyfriend in the process.

She was rushed to the hospital in critical condition, but her status has since been upgraded to “stable.”

Police were initially unsure if the man would be charged with a crime, but have since decided to arrest him on suspicion of aggravated assault.