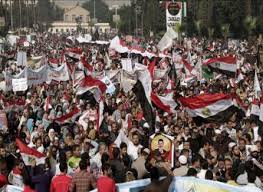 Egyptians have packed into squares in tens of thousands, and marched along streets in Cairo to protest against the military overthrow of president Mohamed Morsi, and the United States called for the first time for him to be freed.

Thousands of people were bussed in from outside the capital to join the sit-in at Rabaa El Adaweiya Mosque on Friday.

A large crowd of Morsi’s Muslim Brotherhood supporters made its way along Ramses Street, close to Tahrir Square, and hundreds were on 6 October Bridge, where some of the worst clashes with anti-Morsi demonstrators took place a week ago.

On Tahrir, thousands more people gathered to attend a celebration of the Muslim fasting month of Ramadan, organised by groups who had called for Morsi’s resignation.
In a separate development, the United States called on Egypt’s military to free Morsi. State Department spokeswoman Jen Psaki said the US agreed with Germany’s earlier appeal for Morsi to be released and was “publicly” making the same request.

Morsi has been held in a “safe place,” according to Egypt’s interim leaders, and has not been seen in public since his ouster on July 3.

Egypt’s new prime minister, who was appointed on Tuesday, said he was still considering the make-up of his interim government.

Hazem al-Beblawi will start contacting candidates for cabinet ministries on Sunday and Monday with a view to having the cabinet sworn in by the end of next week, he told Reuters news agency on Friday.

“I don’t look at political association… If someone is named from [the Brotherhood’s] Freedom and Justice Party, if he is qualified for the post he may be considered,” Beblawi said.

“I’m taking two criteria for the next government. Efficiency and credibility.”

The Brotherhood has already rejected a Beblawi offer to join the new government and pledged to continue agitation.

The protests since Morsi’s removal have often been deadly, with the death of 53 people, mostly Morsi supporters, in clashes around an army building on Monday.

Police have been hunting for the Brotherhood leader, Mohammed Badie, after a warrant was issued for his arrest on Wednesday.

UN leader Ban Ki-moon raised concerns about the detention of Morsi and other Muslim Brotherhood leaders during a telephone conversation with the country’s foreign minister, a spokesman said.

Ban reaffirmed that there must be no “retribution” against any party, UN spokesman Martin Nesirky told reporters after the telephone talks between Ban and Foreign Minister Mohammed Kamal Amr.