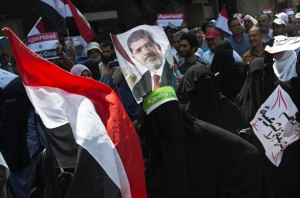 Thousands of people poured onto Egypt’s streets demanding the reinstatement of ousted president Mohamed Morsi, amid warnings by the military of a crackdown on violent protests.

Two formations of fighter jets flew over both Cairo and Alexandria after noon prayers ended.

Four army helicopters circled, while another five, trailing Egyptian flags, flew low over Cairo roof tops, in a clear show of strength by the military.

The rallies come a day after Morsi’s army-installed successor President Adly Mansour vowed to fight for stability against opponents he accused of wanting to plunge the crisis-hit country “into the unknown”.

Waving Egyptian flags and chanting slogans, vast crowds of protesters converged near Cairo’s Rabaa al-Adawiya mosque, where Morsi’s supporters have camped out since his ouster by the army on July 3.

“Islamic, Islamic,” they chanted, of their hopes for an Islamic state.

Smaller rallies took off elsewhere in Cairo and several towns across Egypt after Morsi’s Muslim Brotherhood had called for a day of protests dubbed “Breaking the Coup.”

Opponents of the deposed president, meanwhile, are planning their own rallies later on Friday in Tahrir Square and outside the presidential palace, which were the focal points of the mass anti-government protests that led to Morsi’s downfall.

The planned anti-Morsi rallies expected to take place later that day will also be “to show there is broadbased support for the ‘roadmap’…Now the issue of concern is that of security, according to reports from Cairo.

Morsi’s supporters have clashed several times with security forces, most recently on Monday night, when they fought with police near Ramsis Square, a major thoroughfare in central Cairo.

In a statement issued on Friday, the pro-Morsi coalition urged its supporters to remain peaceful and “adhere to civilised behaviour”.

“To every free Egyptian man and woman: Come out against the bloody military coup,” the alliance said.

Morsi’s supporters are also staging sit-ins outside a mosque in the Nasr City district, and near Cairo University.

Nearly 100 people have been killed in clashes since the removal of Morsi from power. [AlJazeera]