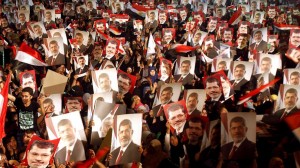 Egypt has not seen the last of protests after Morsi’s ousting has started fresh protests, this time from supporters of the deposed president who have vowed to lay down their lives if that’s what it takes to have the president back in power.

A deadly gunfight has erupted in Cairo as thousands of supporters of deposed Egyptian president Mohammed Morsi marched on the Republican Guard headquarters during mass rallies to reject the Islamist’s ouster.

An AFP correspondent said at least three people had been killed and many others injured in the clashes, which broke out on Friday as thousands of Islamist demonstrators approached the headquarters chanting “traitors” and “Morsi is our president”.

Fires were shot earlier in the day, and tear gas used against protesters, CNN reports.

The protesters had streamed towards the Guards headquarters on foot from a Muslim Brotherhood rally that drew in tens of thousands at Cairo’s Rabaa al-Adawiya mosque.

Shortly before the rallies, around a dozen low-flying military jets screeched across Cairo, a day after they staged a parade leaving a trail of smoke in the shape of a heart in the sky. It was a show of force that failed to deter Morsi’s supporters, however.

The deposed president, who has not been seen since Wednesday, had issued a defiant call for supporters to protect his elected “legitimacy”, in a recorded speech aired hours after he was toppled.

The military had said it supported the right to peaceful protest, but warned against violence and acts of civil disobedience such as blocking roads.

Armed forces were also on high alert in the restive Sinai peninsula, bolstering security after Islamist militants killed a soldier during a machine gun and rocket attack.

Clashes also broke out in the Nile Delta province of Sharqiya, hours after chief justice Adly Mansour, 67, was sworn in on Thursday as interim president until new elections.

Mansour called for unity in an interview broadcast on the eve of Friday’s rallies.

“All I can say to the Egyptian people is to be one body. We had enough of division,” he told Britain’s Channel 4 television.

“The Muslim Brotherhood is part of the fabric of Egyptian society. They are one of its parties. They are invited to integrate into this nation and be part of it.”

“We asked the army to intervene because the other option was a civil war. We were between a rock and a hard place, and people need to understand that,” the former UN nuclear watchdog chief told the BBC.

Ahead of the protests, the army warned Egyptians against resorting to “exceptional and autocratic measures against any political group”.

“The armed forces believe that the forgiving nature and manners of the Egyptian people, and the eternal values of Islam, do not allow us to turn to revenge and gloating,” added the army, even as security forces rounded up top Muslim Brotherhood officials.

The Islamists accuse the military of conducting a brazen coup against Morsi, Egypt’s first democratically elected but divisive president, following massive protests calling for his ouster.

Morsi himself was “preventively detained” by the military, a senior officer told AFP hours after his overthrow, suggesting he might face trial.

A judicial source said the prosecution would on Monday begin questioning Brotherhood members, including Morsi, for “insulting the judiciary”. Thirty-five of them have been banned from travel.

But controversial public prosecutor Abdel Meguid Mahmud said he was to resign, days after being reinstated, citing possible conflicts of interest in future prosecutions.