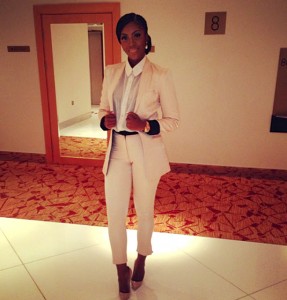 Mavin’s first Lady – Tiwa Savage is claiming to be the female Boss of Nigerian music.

When asked on this week’s edition of Rubbin’ Minds, who she considered the biggest threat to Tiwa Savage amongst the female vocalists, she replied, “none actually.”

“In my head the people I compete against are the male artistes” she stated boldly and further adding that “for me I look at the bigger picture fortunately.”

“I look at people like Wizkid, Iyanya, Tuface, D’banj, Ice Prince. They are getting MOBOs, BET awards, MTVs, so I’m like I’m coming for you guys” she stated.

But she wasn’t all cold as she still gave kudos to other female artistes saying “we are working harder to close the gap.”