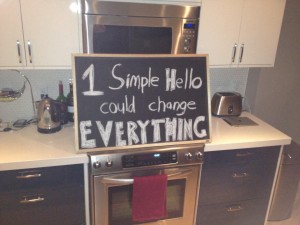 “One simple hello could change everything.”

That’s just one of the dozens of messages Ayden Byle has to offer his neighbors. But he doesn’t tell them face to face. And he doesn’t call them up either.

He writes words of wisdom on a chalkboard, and places it in the front window of his Toronto home.

“When I first started doing it, I was a bit self-conscious,” Byle told the Toronto Star. “I’m a single guy, I’m in here, do people think I’m bats**t crazy? Because every night I’m in here doing my sign.”

The 38-year-old began the daily tradition when he moved into his home in April. According to the Star, when Byle was searching for furniture he found a sign that read, “If you’re waiting for a sign, this is it.” He bought it, put it in his window, and people began taking notice.

Byle, now better known as “Chalkboard Guy,” told CTV News that he thought it’d be fun to “kind of just mess with the neighbors heads” and begin writing his own daily message for them to see.

“Something just kind of magically pops into my head that feels right for the next day,” he told the station.

Messages have included, “It’s not to late to be a rockstar,” “You are beautiful,” “Life’s short, break some rules,” and many, many more.

“It’s always something inspirational or witty. It’s really become a phenomenon,” said Ian Taylor, a neighbor, to CTV. “Something to look forward to everyday.”

“Chalkboard Guy” told the Huffington Post that since the Star article, he has received more than 800 emails from people who were touched by what he does.

His popularity, it seems, is mirroring one of his chalkboard’s pieces of wisdom: “Read the news, or make the news.”