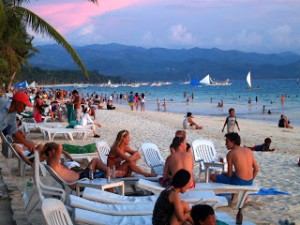 In a bid to boost tourist visits, the Philippines has extended visa-free stays from the previous 21 days to 30 days for nationals of 151 countries.

Under an arrangement between Bureau of Immigration and the Department of Tourism, foreign nationals from 151 countries can enter the country without a visa, acting Immigration Chief Siegfred Mison said.

“Nationals from a list of 151 countries whose nationals may enter the Philippines without a visa for a stay not exceeding thirty days under Executive Order (E.O.) 408, provided these foreign nationals are holders of a passport valid at least six months, beyond the period of stay in the Philippines and return or outward bound tickets to country of origin or next country of destination,” Mison said.

Countries listed on the visa-free entry list include nearly all of the world’s nations except for some such as Afghanistan, Algeria, Egypt, Iran, Iraq, Libya, Lebanon, Jordan, Pakistan, India, Sudan, Syria, Palestine, Yemen, East Timor, Nigeria and 31 others — as well as stateless persons.

Foreigners who are subject of deportation and blacklist orders exempted from the programme.

Earlier, the Department of Tourism announced that it is targeting tourist arrivals to reach 10 million for 2013. Tourist visits to the Philippines from January to December 2012 reached 4.6 million, which is higher by nine per cent from the previous year.

Officials had cited that many foreign tourists who had visited the country last year opted to stay longer or beyond the period of their visa.

From January to December last year the Bureau of Immigrations visa extension office processed and approved a total of 172,055 applications for extension of stay by foreign tourists.

The number of approved visa extensions in 2012 was 13 per cent higher than the 151,913 applications for extension of stay the bureau approved in 2011.