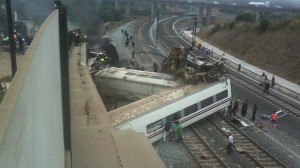 Spain’s government said two probes have been launched into the cause of the train that derailed near the town of Santiago de Compostela in Spain’s north west, killing at least 78 people.

The Interior Ministry later raised the death toll to 80, while 95 remained hospitalised, 36 in critical condition, among them four children.

Carriages piled into each other and overturned in Wednesday’s crash, smoke billowing from the wreckage of mangled steel and smashed windows as bodies were laid out under blankets along the tracks.

State railway company Renfe said it was too early to determine the cause but several media outlets and eyewitnesses said the train carrying 218 passengers and four crew was speeding.

The train came off the tracks on a curve on Wednesday at 8.42 pm, as it was about to enter Santiago de Compostela station in the northwestern region of Galicia.

One of the drivers who became trapped in the cab after the accident told railway officials by radio shortly after the crash that the train had taken the bend at 190km/h an hour, unidentified investigation sources told El Pais newspaper.

“I hope no one died because it will weigh on my conscience,” he said, according to the paper’s online edition. 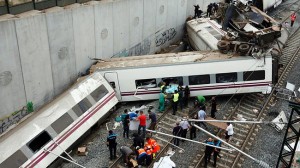 The video footage, which the Spanish railway authority Adif said probably came from one of its cameras, shows the train carriages start to buckle soon into the turn.

After impact, witnesses said a fire which engulfed passengers trapped in at least one carriage most likely from the diesel fuel carried in the locomotive units.

“I saw the train coming out of the bend at great speed and then there was a big noise,” said one eyewitness who lives beside the train line, Consuelo Domingues. “Then everybody tried to get out of the train.”

Spanish Prime Minister Mariano Rajoy, a native of Santiago de Compostela, visited the scene of the accident on Thursday and declared three days of mourning.

King Juan Carlos and Crown Prince Felipe called off their public engagements out of respect for the victims.

Rescue workers spent the night searching through smashed carriages alongside the tracks.

Hundreds of local residents and tourists attended a nearly two-hour mass in the city’s imposing cathedral to pray for the victims.

Pope Francis called for prayers, while France, Poland, Italy and the European Union sent their condolences.

The accident is the third large rail disaster this month after six people died in a passenger train derailment near Paris on July 12, and 47 were killed when an oil train derailed and exploded in Canada on July 6.