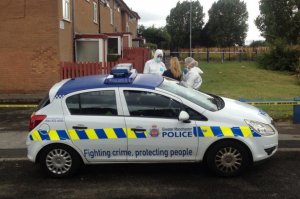 A 13-year-old girl is fighting for her life after a stabbing attack in which a man believed to be her father has died near Manchester.

Police found the teenage girl after 10pm on Sunday at a house in Moston, where her father’s body, age 41, was also discovered.

Police said her wounds were believed to have been from the stabbing attack.

Officers said the man suspected of killing the man was found less than three hours later, after reports another man had threatened a car owner with a knife and stole a vehicle.

The man died of multiple stabbing wounds a short time later after driving the car into the side of a nearby pub.

Detective Superintendent Simon Barraclough, of Greater Manchester Police, said: “We are in the very early stages of our inquiries and are piecing together the circumstances that led to two men losing their lives and a 13-year-old girl fighting for her life in hospital.

“Obviously the community will be shocked as to what has happened but we can say we do not believe anyone else was involved and are not looking for anyone else in relation to this incident.”