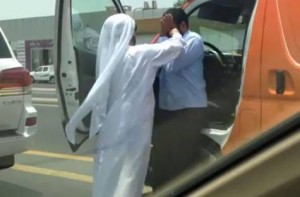 The Dubai Police on Tuesday transferred the case of a senior government official to the Public Prosecution for allegedly assaulting a van driver following a minor traffic accident.

A YouTube video that showed the alleged assault went viral on social media on Monday night, but the clip was later removed.

Major General Khamis Mattar Al Mazeina, Acting Chief of Dubai Police, said, “Dubai Police apprehended the government official and called the van driver after taking cognisance of the case. Though the van driver did not file a complaint against the official immediately after the incident on Saturday, police acted swiftly in public interest.”

Police said the Indian van driver clipped the Emirati official’s four-wheel drive in the Muraqqabat area and drove away without bothering to stop — which is against the law. Motorists involved in minor accidents must stop and both parties need to report the matter to police.

The official then chased down the driver, stopped him and allegedly assaulted him.

The YouTube video posted by a passer-by shows the assault happening in clear view of other road users. Another passer-by is shown intervening to stop the assault.

Maj Gen Al Mazeina said the official has been detained and the case has been transferred to the Public Prosecution. “The suspect told police during investigations that the van driver verbally abused him after the accident,” he said.

“Even if it is true that the van driver verbally abused the official, no one has the right to take the law into their own hands,” Maj Gen Al Mazeina said. “The police and other authorities are responsible for dealing with such incidents. We will not allow anyone else by any means to act on behalf of law enforcement authorities.”

“This kind of behaviour is not a part of our tradition or morals. Emiratis treat their guests well and respect all nationalities and cultures. They are forgiving and kind-hearted and will not behave in this way,” he said. “Even if they are involved in major accidents, no Emirati behaves in this way.”

The family of the official has filed a case against the person who filmed the video and posted it on YouTube, since it violates the UAE Cybercrime Law, which prohibits anyone from taking videos or pictures in public areas without the acknowledgment of people involved. Such an act is illegal and constitutes defamation, according to Dubai Police.

Maj. Gen Al Mazeina said police will investigate the complaint since any person with such a video must share it only with police and relevant authorities and not post it in the public domain.

Commenting on the video on social media, a user who identified himself as Saeed Al Adawi wrote: “The country has laws and taking matters in your own hands does not work. You tarnished the image of the UAE, Arabs and Islam with your behaviour.”

Another YouTube user identified as Yasmin Al Ahmad commented: “You can’t do that [beat someone] and get away with it in Dubai”.

Another user, Sascha Winter, said there was no need for such action because there are laws. “There are many legal actions that can be undertaken by law enforcement. Times when an eye was for an eye are thankfully gone.”