US Handling Of Boko Haram Is A Stunning Betrayal – Oritsejafor

President, Christian Association of Nigeria (CAN), Pastor Ayo Oritsejafor, yesterday faulted the United States (US) government over its continued refusal to tag Boko Haram as a Foreign Terrorist Organisation (FTO). 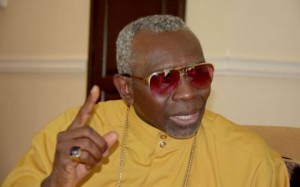 Speaking at a joint CAN/CANAN World Press Conference in Washington, DC, the CAN president said the US ambivalence on the matter “is a stunning betrayal.”

“After 9:11, Nigeria was among nations that cooperated with global efforts on tracing terrorist financing to the point that a designated foreign financier was uncovered running a cereal factory in Northern Nigeria.

“The FTO designation will kick off the tracking of terror-financing and arms shipments. It is now one year since I testified before the US Congress and still the US has not designated Boko Haram a foreign terrorist organisation even though it has killed citizens of over a dozen countries and attacked Americans too”.

“Every week, I get a text message – a church was burnt or a pastor was murdered or Christians were randomly rounded up on a roadside and summarily executed. Last week at my inauguration, one seat was conspicuously empty – that of Rev Faye Musa Pama, CAN secretary Borno State chapter. He was assassinated in his home in the presence of his kids,” Pastor Oritsejafor said.

Oritsejafor argued that the proposed FTO debate was “a needless one”, stressing that “the Boko Haram terror group ought to have been designated an FTO long ago.”