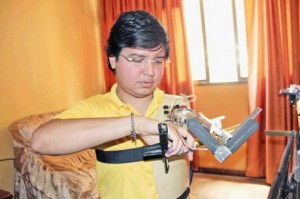 Angel Sanguino, an electronics technician from Caracas, Venezuela, who last year lost his left arm in a motorcycle accident, has recently been awarded a Prize for Science, Technology and Innovation, after he manged to build an ingenious robotic arm that allows him to perform a series of useful tasks.

33-year-old Angel Sanguino was riding his motorcycle when he was hit by a speeding car engaged in illegal street racing. He was taken to the emergency room, and doctors were forced to amputate his left arm from the shoulder. It was a devastating blow for the talented electronics technician who worked for a prestigious computer part manufacturer, as he could no longer do his job with just one arm.

The orthopedist told Angel he should accept his disability and move on with his life, but he had other plans. While in intensive care recovering from the surgery, severe internal organ damage and fractured legs, Sanguino learned he was going to become a father soon, and that gave him the strength to fight for his life and make sure he was able to provide for his family. Three months after his accident, the young Venezuelan used his experience as a cartoonist to design a prosthetic arm that would allow him to repair electronic components just like before.

With the help of his uncle, Brunel Rodriguez, Angel managed to create an ingenious robotic arm fitted with a series of switches and sensors that allowed him to control it with the motion of his collarbone. Rodriguez, who is an orthopedist, provided the necessary parts from other prosthesis, and Angel used his knowledge of electronics to make sure the artificial arm allowed him to do his job without any kind of assistance from anybody else. He paid little attention to aesthetics, focusing solely on functionality, but he already has a new prosthesis in the works that is apparently much more visually appealing. His home-made prosthesis is equipped with with a clamp for holding the items in need of repair, lighting and a magnifying glass for improved visibility.

It’s powered by a small motor connected to a battery, and he is able to control the motions through a series of sensors that react to the movement of his collarbone. Sanguino plans on replacing the rudimentary motor with a servomotor that will operate the arm instantly and more precisely.