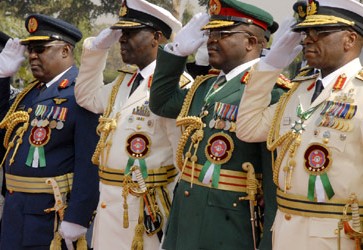 The appointments of all the service chiefs by President Goodluck Jonathan has been declared as unconstitutional, illegal, null and void by a court in Abuja because they lacked the approval of the Senate as required by the Constitution.

Delivering judgement yesterday in a case filed before it since 2008 by human rights lawyer, Festus Keyamo, Justice Adamu Bello of the Federal High Court, also restrained the President from further making such appointments without the approval of the Senate.

Information Nigeria reports that Keyamo had approached the court to determine, among others, whether by the combined interpretation of the provisions of Section 218 of the 1999 constitution and Section 18 of the Armed Forces Act, Cap. A.20, Laws of the Federation of Nigeria, 2004, the President can appoint the Chief of Air Staff, Chief of Army Staff and the Chief of Naval Staff without the confirmation of the National Assembly.

In his ruling, Justice Bello, while granting all the prayers sought by Keyamo, said the President lacked such powers.

Reacting to the judgment, the Presidency said it has not been served details of the court judgement but assured that the Ministry of Justice would study it and give advice accordingly.

Special Adviser to the President on Media and Publicity, Reuben Abati, said: “I have not read the judgment, and I cannot comment on the judgment that I have not read. It is a bad practice to comment on an issue merely based on the snippet in the newspapers. But I can assure you that the Ministry of Justice will examine the judgment, study it and accordingly advise the government on the steps to take. For now, that is all I can say.”