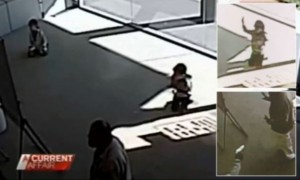 Two young children were forced to their knees at gunpoint as a gang of robbers raided their father’s business. CCTV footage shows the terrified children, Zara Khan, eight, and her brother Ibrahim, five, being ordered to the ground and made to hold their hands up by armed robbers in Sydney. Their father Shafiq was then forced to hand over cash at his taxi service at knife-point while guns were still pointed at his children.

Mr Khan said his young son has been left so traumatised by the robbery that he has nightmares and wakes up shouting, ‘please don’t shoot me’. The children were playing catch in their father’s office when the gunmen, dressed in hoods and balaclavas, forced their way in on July 3. They kicked their way through a door and kept a 9mm pistol pointed at the children while another member held a knife to their father’s back.
The gang even screamed at the helpless children to put their hands up.

After fleeing, Ibrahim was still too scared to move and remained frozen to the ground with his hands in the air. His older sister ran towards her father and later said she initially thought the gang was just ‘pretending’. She told A Current Affair: ‘I thought it was just like a game. He kept pointing the gun at us. I was trying to curl under the chair… but I was too scared to move.’

Mr Khan said the most horrifying part of the ordeal was when the robbers pointed the gun at his children. He said: ‘I kept on looking at my kids. I was terrified. ‘If I had a million dollars I wouldn’t dare resisting. My kids’ life is more than a million dollar – it’s priceless.’ Mr Khan said Ibrahim had nightmares for three days after the robbery and both children want to sleep in his and his wife Yasmin’s bed. It is the second time Mr Khan has been robbed at gunpoint and the family now plan to leave Australia for Mrs Khan’s native England.