A trainer at an animal farm in Thailand has been bitten on the head by a crocodile during a show. 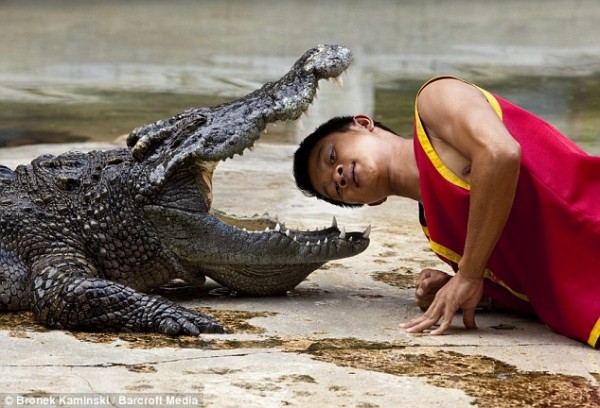 Shocking video has captured the moment a trainer at a crocodile farm in Thailand was bitten on the head by one of the giant reptiles.

Pravit Suebmee, 27, was performing for a group of tourists when he put his head in a crocodile’s mouth on Sunday morning.

The beast quickly clamped his jaws on Mr Pravit’s head, leaving bite wounds on his face and neck. Despite the attack Mr Pravit was not seriously injured.

“This is the first time this has happened at our crocodile farm,” owner Uthen Youngprapakorn said.

“I’ve regularly warned the performers to be careful at all times.”

Mr Uthen said the crocodile was probably startled when Mr Pravit slipped, causing it to snap its jaws shut.

The video shows the crocodile thrash Mr Pravit back and forth for a moment before another handler pulls it by the tail, allowing the trainer to be released.