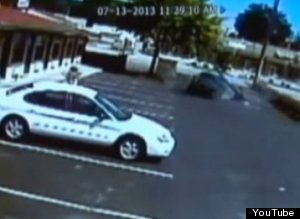 An Ohio man and his pregnant girlfriend “cheated death” when an SUV traveling at 100 mph slammed into the motel they were staying in, pinning the woman between a couch and the bed.

Adrian Smith and Rochelle Watson were asleep at the Crown Inn Motel in Toledo on Sunday when the SUV — driven by 32-year-old Thomas Wallace of Michigan — ran a red light, jumped a curb and demolished their room, ABC News reports.

“I thought the motel room exploded,” Smith told the station. “[The crash] threw me back. Everything pushed forward my way: the dressers, the tables, the air conditioner.”

He said the crash also knocked Watson off her feet and pinned her down. She is eight months pregnant. Miraculously, the couple left the motel unscathed.

Wallace told police that he lost control of his vehicle after running a red light, WTVG reports. Alcohol was not believed to be a factor in the crash.

In the full video, posted on YouTube, someone appears to be fleeing the scene of the crash, but it was unclear whether it was Wallace.

Three rooms were damaged, but there were no significant injuries.