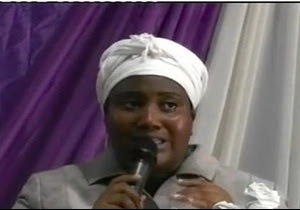 Linda said she was shocked to see her parents in hell. She also said she saw late American singer Whitney Houston and Muammar al-Gaddafi in hell.

According to the video, this is her second visit to hell. She mentioned the names of the people she saw and the messages they gave her to deliver to people on earth.

“Jesus went with me to hell this time, when I was with Jesus, the brightness of Jesus; Jesus have light all over His body, when we entered that dark place, I was seeing, I could see, this time, the people in hell because of the bright light on Jesus (Jesus is walking with a bright light, a glorious light).

“And then, Jesus opened my eyes to see some of these men and women in hell. Jesus gave me message to Sierra Leone, He said if I had come between December and January, only five people in Sierra Leone would have been raptured.

“Jesus said Sierra Leone is polluted; that the shepherds he gave the word to preach to His people in Sierra Leone are dying to meet God, but majority are in hell. So Jesus sent me to Sierra Leone.

“When we were in hell, Jesus showed me a glass-like aquarium with people inside it, the souls of human who are still on earth are in that glass inside hell. These are people on earth who are working for demons, we have some people on earth who don’t believe anything, they are on their own, doing all sorts of bad things, even pastors who knows the truth but are bowing down to Satan,  they are partakers of Satan’s communion, their souls are in that place.