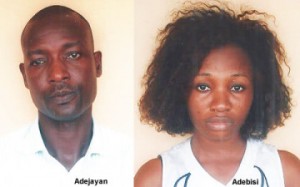 Two persons, Adetokunbo Adejayan and Juliet Adebisi, have been arrested by the police Special Fraud Unit, Ikoyi, Lagos, for pretending to be married in order to secure a United States visa.

The crime was said to have been brought to the notice of the SFU through a petition by the Assistant Regional Security Officer, United States Consulate General.

Police investigations revealed that Adejayan and Adebisi were not husband and wife as claimed.

It was discovered that the false union was arranged by one Segun and his syndicate, which specialise in teaming up US visa lottery winners with non-winners   for onward “smuggling” to the US.

A statement by the SFU Public Relations Officer,  Ngozi Isintume-Agu, said, “Their method is to merge a visa lottery winner with a non-winner and package both to US.

“In this case, the sum of N1.5m was paid by Adebisi and she was purportedly joined in matrimony with Adejayan, who genuinely won an American Visa lottery.  Both suspects have made confessional statements that they are not legally married.”

Adeyanju, 35, who teaches in a secondary school   in  Mafoluku, Oshodi, was said to have won the lottery in May 2012.

His statement to the Police read in part, “It was my brother’s friend who played the lottery for me and he was the same person who called to tell me that I had won.  He advised me to get a ‘wife’ before coming to the US. He then introduced me to Segun, assuring me that he (Segun) would help.

“It was Segun that brought Adebisi for the arranged marriage and subsequent interview and visa.”

Adebisi paid N1m to Segun in June 2012 to process her visa and another N500,000 for passports, medicals and training.

The Commissioner of Police in charge of SFU, Mr. Tunde Ogunsakin, said, “It was Segun who booked the appointment for the suspects at the embassy as husband and wife. The fake marriage was arranged last year.

“Investigation is ongoing and effort is on top gear to arrest Segun and his cohorts.  The arrested suspects will be charged to court soon.”