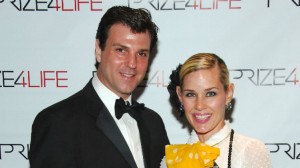 A pair of Manhattan socialites are suing a private school for nearly a half-million dollars after it allegedly tricked them into bidding $50,000 for a finger painting done by kindergarteners.

According to the lawsuit filed on Friday in New York State Supreme Court, Michelle-Marie and Jon Heinemann claim the Cathedral School of St. John the Divine sent them a bill for $50,000 after the March 1 silent auction.

“This is essentially a painting done by 5-year-olds,” a “source who knows the family” told the New York Post, which first reported the lawsuit.

The school scoffed at the Heinemanns’ claims.

“These allegations are sad, false and without merit,” a spokesman for the Upper West Side school said in a statement to Yahoo News. “The Cathedral School has a more than 100-year reputation of excellence in education and service to its students and demonstrates a profound respect for the dignity and equality of every child.”

The Heinemanns—whose 5-year-old son, Hudson, attended the school—were not present at the auction but instructed the school to bid on their behalf until they won the artwork. They claim the finger-painted piece should have sold for a maximum of $3,000, but a high-ranking school official made a first-grade teacher bid against the Heinemanns, resulting in the $50,000 price tag. And that was in addition to “$6,000 worth of designer clothing items” the Heinemanns bought and donated to the school specifically for the auction, the suit states.

Additionally, Plaintiff Michelle-Marie Heinemann, a renowned artist whose works have sold for tens of thousands of dollars, donated significant amounts of her time to work with the children at the school on an art project to be included in the Auction.

The family subsequently pulled Hudson out of the $39,000-a-year school. According to the lawsuit, the employee who engineered the auction scam was terminated.

But the Heinemanns say their trouble with the K-8 day school began well before the auction. They say Hudson was “subjected to disparate and unfair treatment” during the 2012-2013 school year.

He “was consistently left out of School exhibits and films” and “was made to go last at nearly everything,” the lawsuit claims:

On one occasion, Plaintiffs’ five-year-old son was relegated to the role of “door-holder” and ordered to hold the door for all of the other students.

The Heinemanns say they tried to discuss the situation with school officials, but “were either ignored or otherwise met with resentment.”

They say they “were forced to endure humiliation and emotional damages” as a result of the auction debacle. They’re seeking $415,900 in damages, including the following: