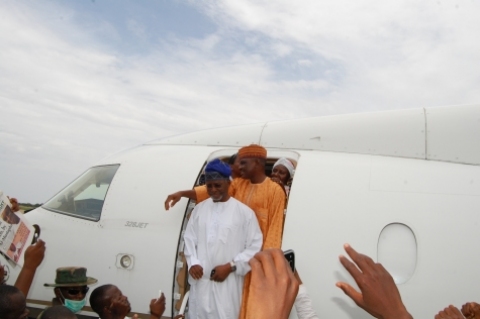 Founder of Odua Peoples Congress (OPC), Dr Fredrick Fasehun, in this interview culled from Nigerian Tribune, explains Sunday’s visit to Kano in company of Major Hamza Al-Mustapha, his relationship with him and denies certain statements purportedly credited to him.

On Al-Mustapha’s open declaration of him as his father, Fasehun says, “En, ooto lo so yen (he spoke the truth). Does the fact that he called me his father make me his biological father? I have no apology to make in the choice of my friends and that I travelled with him to his hometown after his 14 years absence from such a town, ah! Please, we don’t need to make a mountain out of a mole hill. This is one Nigeria, are we at war? Is Nigeria at war?” he asked.

Debunking reports that he called the former Chief Security Officer (CSO) to late General Sani Abacha a hero, the respected medical doctor says, “I didn’t say that. That is a lie. I never used the word hero. I said Mustapha is a Nigerian citizen and that he shouldn’t have been kept for that long in the prison and that we thank God now that he has regained his freedom and that Nigerians should view it as a new dawn. Do we have heroes in Nigeria? Where are the heroes in Nigeria?”

He also took the time to clear the air on the involvement of his group, OPC, in the provision of security during his visit to the state.

According to him, “How can I provide security in Kano? The OPC in Kano got to know that I would be in Kano and they came to meet me.

“They didn’t provide security, but for me. Mustapha didn’t need security to be provided for him. Security was made available to him by the state government. So, there is no way I will come from the South West and come and provide security for a northerner. Won kan npuro ni o (they are just lying). Every Nigerian knows that OPC is widely spread in the north. Whenever I go to the North, I am received by members of OPC.”

On his relationship with Al-Mustapha, Fasehun says, “I came to Kano with Mustapha who has just been released from 14-years incarceration and he is my friend and like many of his father-friends, we came to accompany him to return to his home state. That’s all we had done and I’m surprised that people are now insinuating that I provided security for him, I did this, and I did that, far from it.”