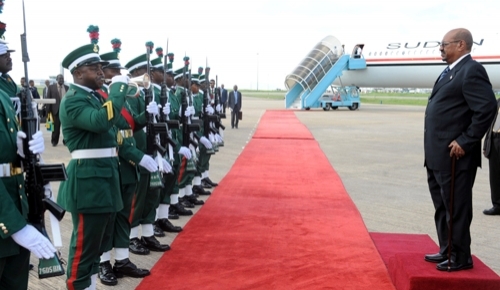 The Presidency on Monday defended welcoming Sudan President Omar al-Bashir to the country for an African Union health summit despite war crimes charges against him, saying it cannot interfere in AU affairs.

The Sudanese leader arrived Abuja on Sunday for the summit on HIV/AIDS, turberculosis and malaria despite being wanted by the International Criminal Court on charges of war crimes, crimes against humanity and genocide.

AFP reports that the summit is due to take place on Monday and Tuesday.

Rights activists in Nigeria planned to go to court on Monday to force al- Bashir’s arrest.

“The event that is taking place is an AU summit,” Reuben Abati, spokesman for President Goodluck Jonathan, told AFP.

“Nigeria is just hosting it. It’s not Nigeria that invited him. He’s not here on a bilateral visit. He’s here to participate in an AU summit, and Nigeria is not in a position to determine who attends an AU event and who does not attend … Nigeria is just providing the platform for the meeting,” Abati added.

The ICC had issued two warrants against al- Bashir over the conflict in Sudan’s Darfur region, where government forces and local Arab militias have been pitted against rebels drawn mainly from non-Arab populations.